***Notes:
- Unfortunately, due to the heavy picture-content of these pages, this blog might not be suited to mobile browsing.
- Throughout this blog, GE stands for Google Earth and SMR for Site and Monument Records held by the DOENI.
- Click to enlarge all pictures in this post. Pictures are best viewed in darker conditions (details and faint features will not be visible in GE while in a sunny room for instance). Also bear in mind that the images here are copies and extractions from GE, a process which already invariably causes a loss in definition.
- Please feel free to share this blog if you know anybody who might have an interest in its contents!***


[If you are visiting this blog for the first time and wondering what this is all about, I invite you to read my first post where I introduce what is the NIDAS project: 'Intro Part I: about this blog...']


So, where to start?

The study area focuses on Northern Ireland and generally more specifically on zones where the Google Earth coverage provides substantial details. Many sites can be located using this great resource and I always found it rewarding to explore local landscapes and locate traces of the past.

The most obvious and most numerous archaeological remains visible from above are undoubtedly the large ringforts, or raths, of which tens of thousands are recorded on the island of Ireland. On Google Earth, the upstanding examples dot the entire countryside but it is also possible to find many cropmarks and raised remains of levelled raths. Of course, the great majority of these are already known and recorded within the Site and Monument Records (SMR) but I quickly realised that here and there, when comparing with the known heritage (using the SMR Map Viewer), I was gradually picking up a lot of unrecorded ringforts. Not only that, and this is another important side to this research, but even for sites which are already recorded (still existing or having existed), the views offered by the digital imagery sometimes add quite a lot of details to our knowledge of these sites and I have also catalogued many sites for which information contained in the SMR is scarce or non-extistant (e.g. destroyed sites for which nothing is known expect location, unlocated sites, A.P sites without clear information,etc.).

It is a time-consuming process not helped by the fact that it is common for a cropmark to only be visible on a single dated layer but not on any others (that's where the historical imagery feature in GE becomes invaluable and why, to be thorough, each area should hypothetically be combed-over using all available GE dated layers). This is an issue long-known to aerial archaeology since observations are always highly dependent on the time of year, the type of ground cover and many other aspects (e.g. angle of the sun for levelled raised features).

Little by little though, I looked beyond simply trying to identify raths and discovered many other sites: large enclosures, smaller ones, complexes of features, ring-ditches, barrows (and barrow cemeteries too!), as well as various other types. Each one of them had to be checked against the SMR to ensure its known/unknown status. At this stage, I now sit in the possession of several hundred sites and possible sites (as well as enhanced information on countless other recorded sites) spread across Northern Ireland. There is no doubt that this type of work could be carried out across the border using the online Irish site database (via www.archaeology.ie). Indeed and to verify this, I carried out a few pilot surveys in several areas within the Republic of Ireland and did manage to locate several unrecorded sites there too; I will post these soon once I have gone a bit more into the Northern Irish material.

This first post will focus on three of the nicest sites that I have discovered up to now, and these come from three corners of Northern Ireland: 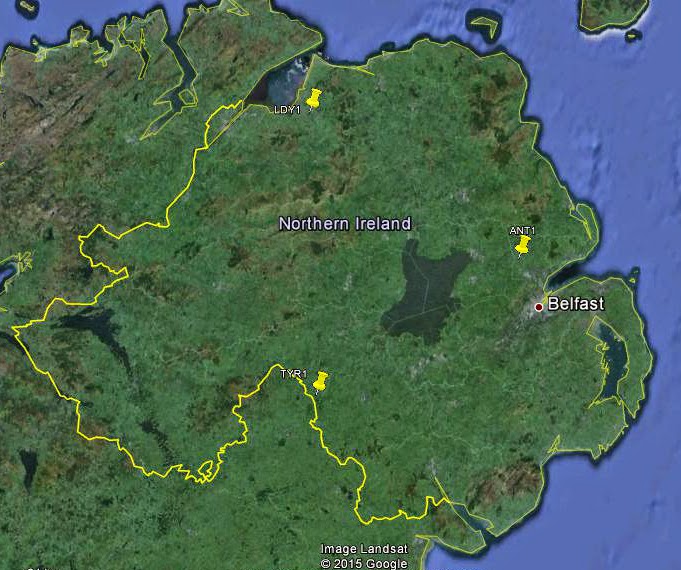 Fig.1: First trio: location of the three sites discussed in this post.

Note: After many attempts at numbering and categorising all my sites within the last few years, I decided here to use the following simple nomenclature: sites will be identified by their County followed by a number representing the chronological order in which the sites appeared on this blog (as I reveal them). 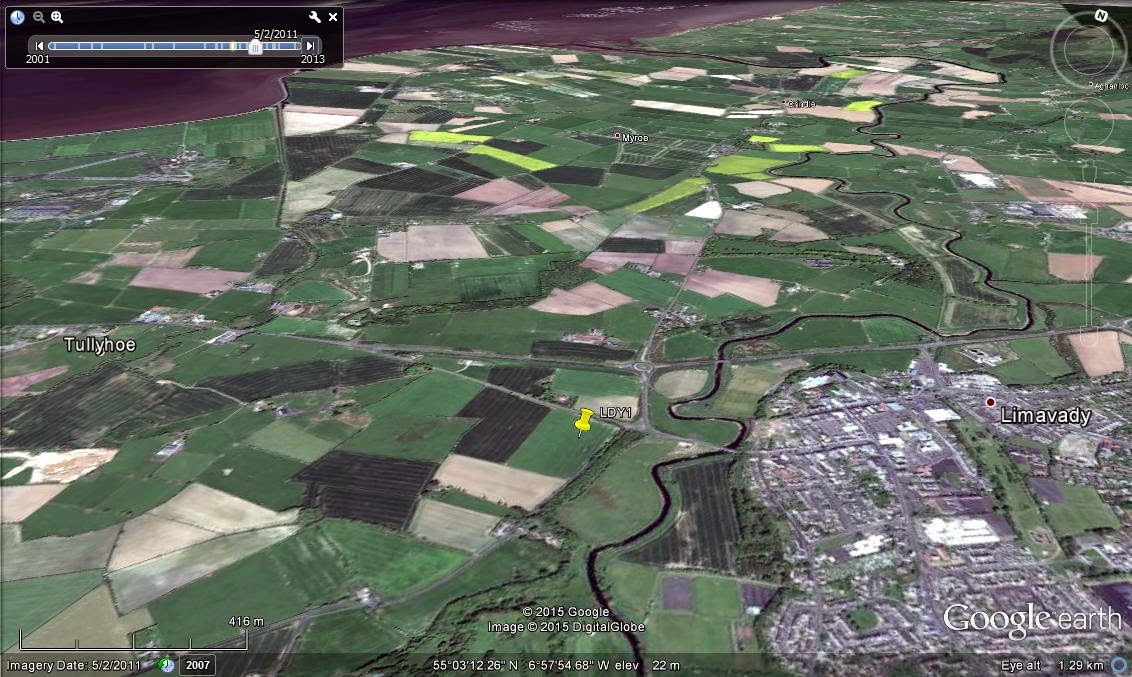 The site is located on a slightly elevated terrace above the valley of the Roe River, immediately west of the town of Limavady. The remains are substantial and it is one of the few sites for which GE shows a decent amount of details on many different timed views. The five images below show the extent of the site as shown by GE going back through time, starting in 2012: 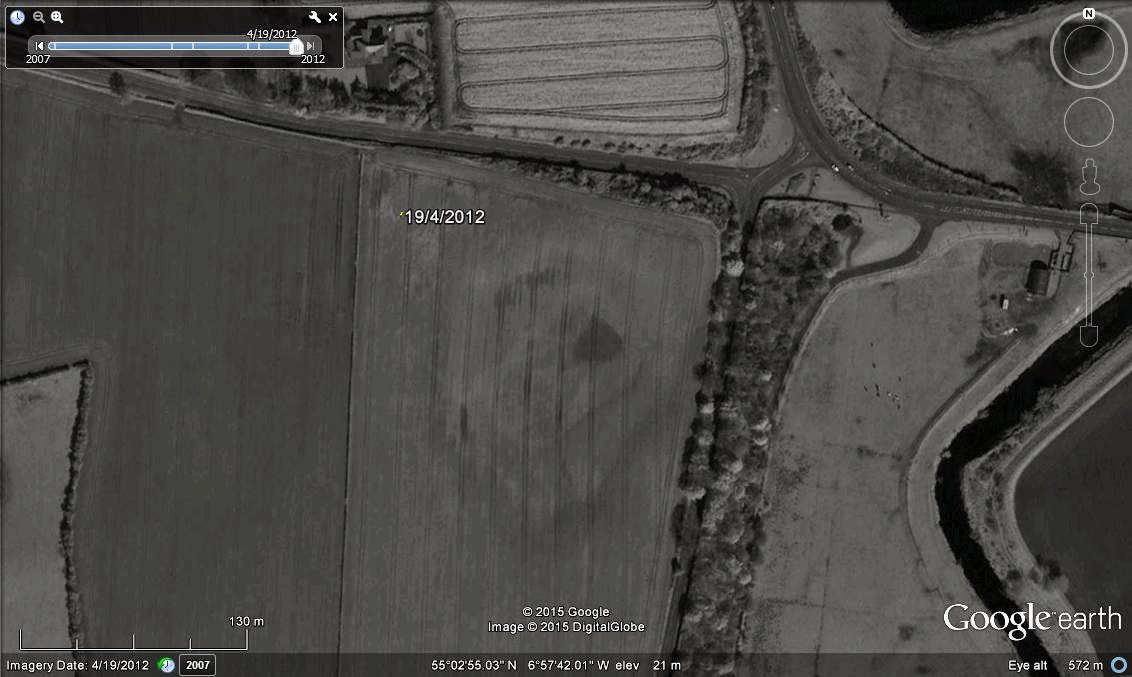 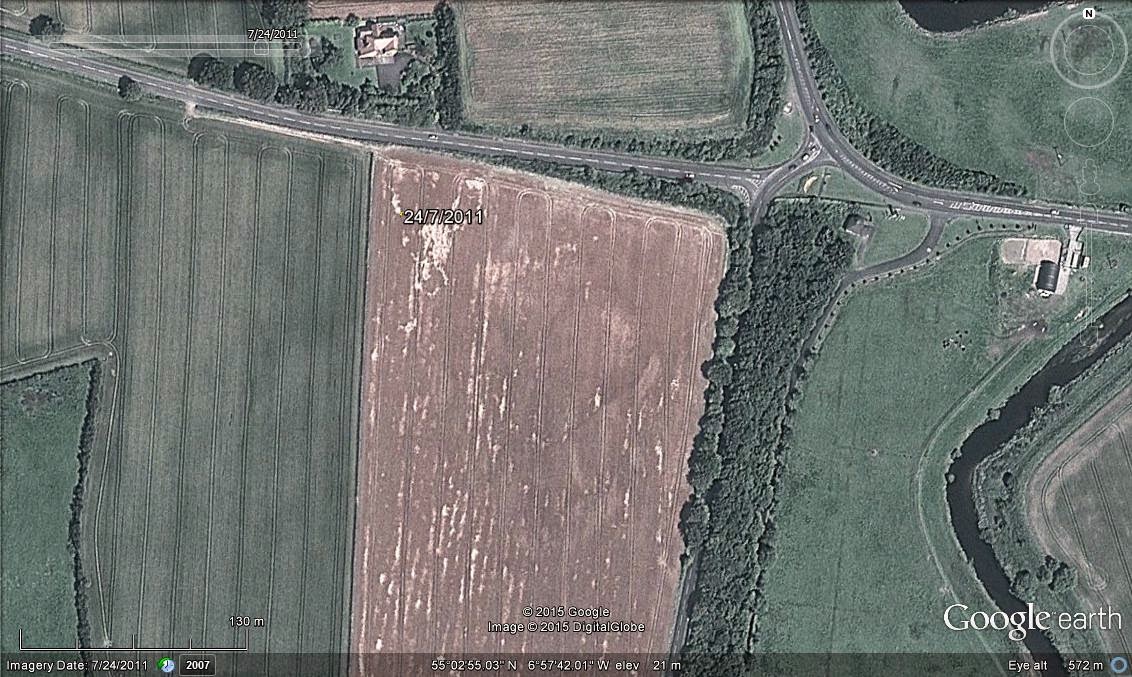 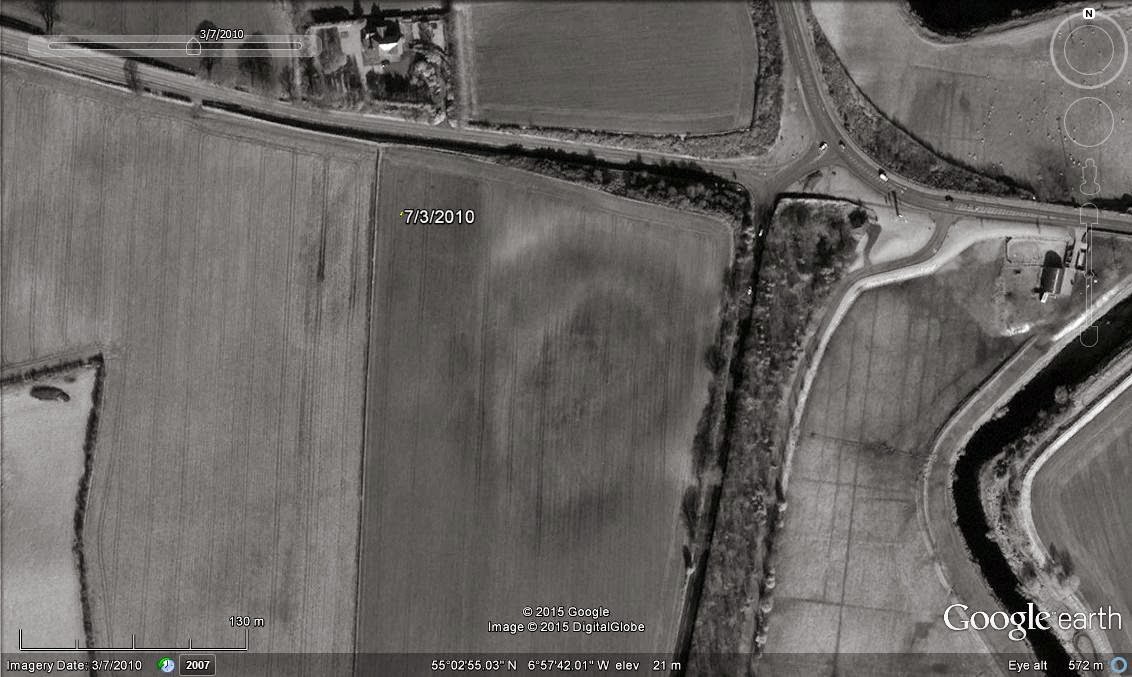 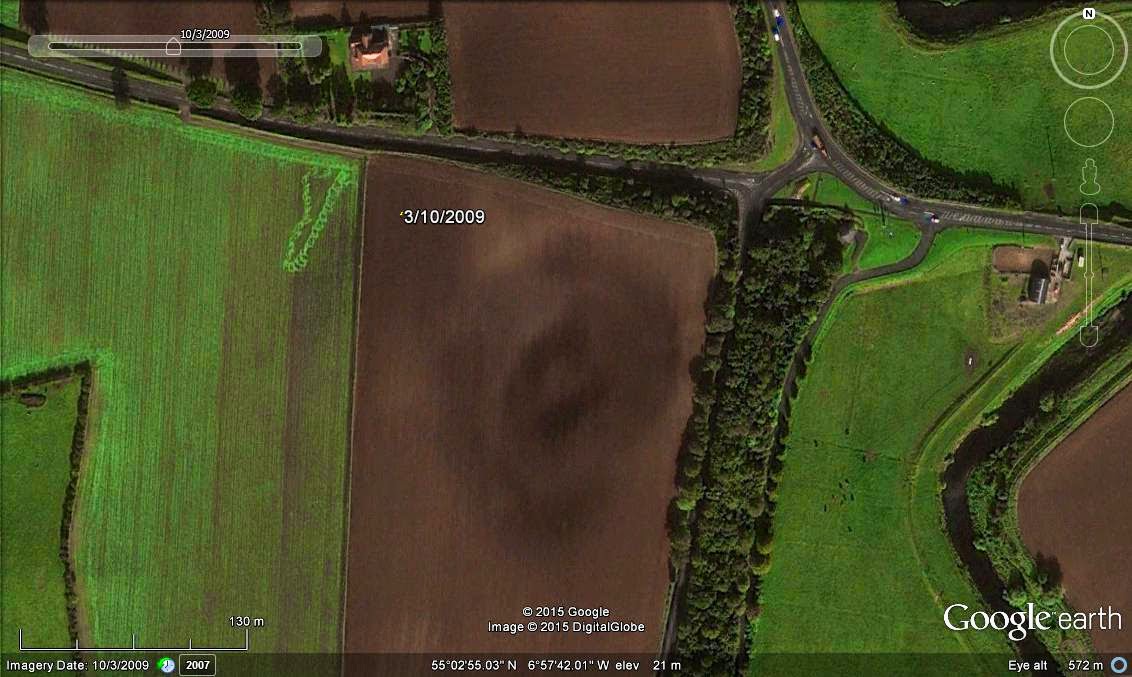 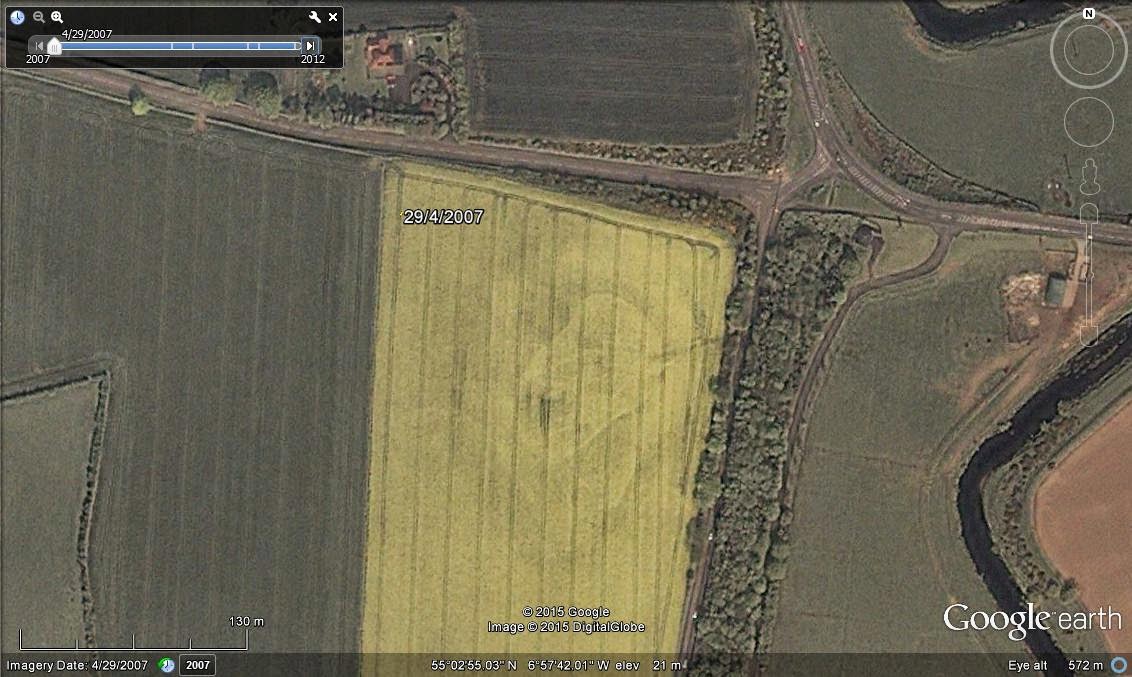 
The features seen above seem to represent a very large embanked enclosure with a wide bank/ditch system. The interior of the enclosure is well-defined by another ditch that is markedly ‘keyhole’-shaped and orientated NE-SW (best viewed on Fig.7). Further traces of faint but unidentifiable features may be seen inside this internal enclosure.

The dimensions are impressive: the internal enclosure is c.96m in length and between c.53-63m in width (wider at NE end) while the maximum external size of the monument appears to be c.170x150m. An indication of size is given in the picture below where cars on the nearby roads to the east (bottom of picture) can be spotted. 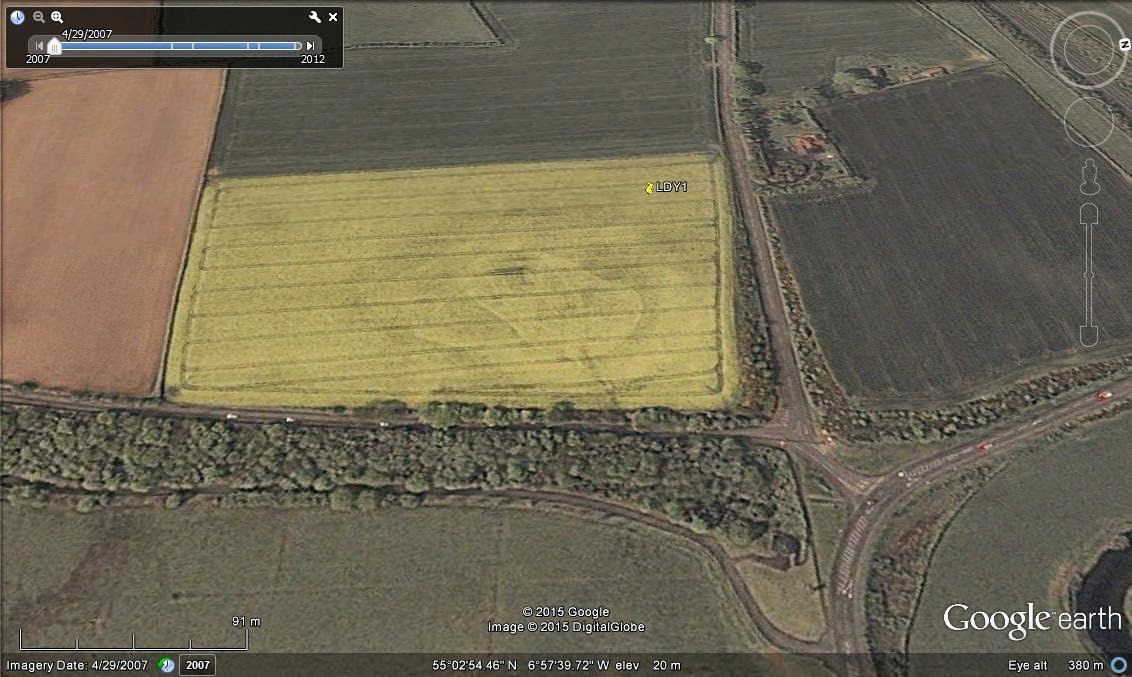 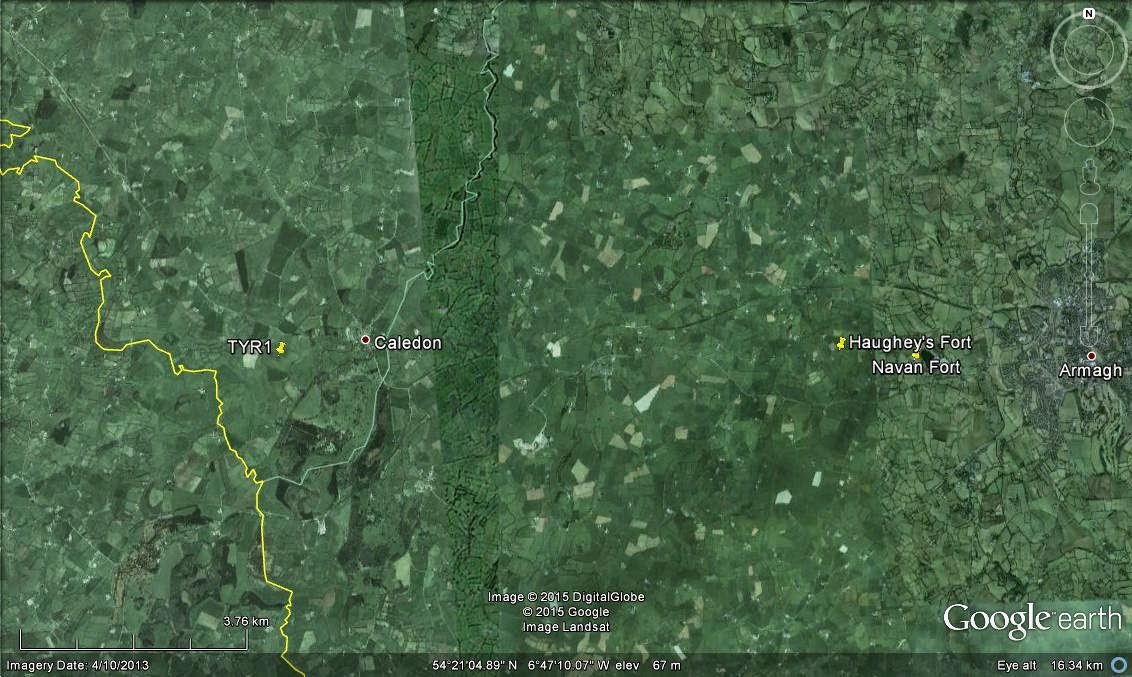 This extraordinary site is located on top of a wide and high drumlin overlooking the River Blackwater and the border with Co. Monaghan.  It is found just outside the village of Caledon and is 10km due west from Haughey's Fort (Late Bronze Age hillfort) and Navan Fort (Iron Age capital of Ulster). From this elevated spot, views extend in all directions (although to the east, not as far as the two aforementioned sites).

Unlike the enclosure presented above, I will only post a few pictures for this site as these should speak volumes... 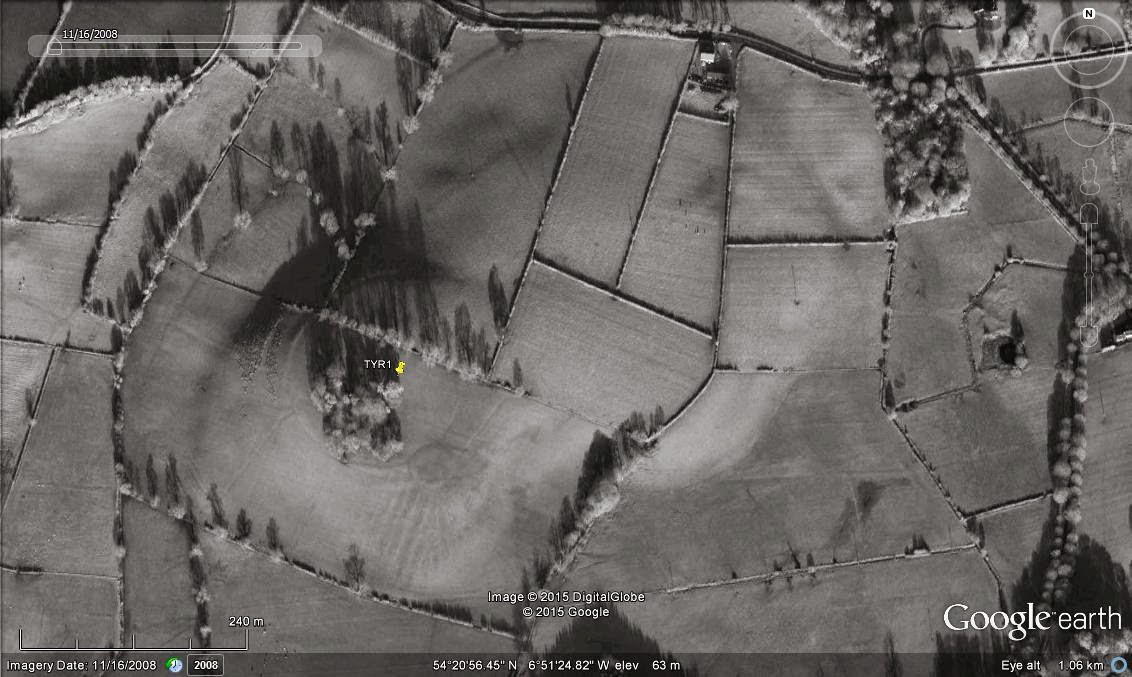 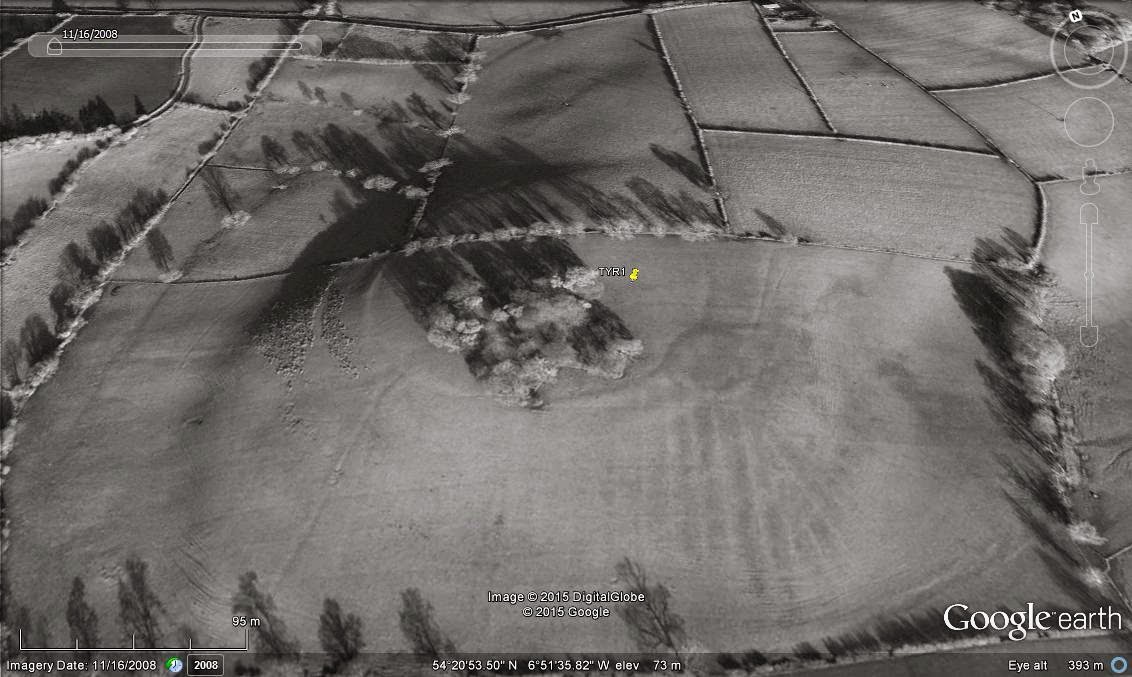 Where to start once again? Firstly, to the southeast of the hill summit, an unrecorded rath is immediately identifiable thanks to the remains of its surrounding bank picked up on this great GE view. It is not a small rath either, with a diameter of c.42m. Incredibly, this ringfort was clearly built over two older courses of banks and ditches.

Indeed, the main attraction here is the bivallate enclosure crowning the whole summit of the large drumlin. It is at least c.260x230m and covers an area of around 11 acres (5ha). I must point out that there are further traces of ditches and banks visible around the base of the drumlin to the west and north (see Figs. 10-11 and other GE view dated 8/4/2011) and it is possible that these also belong to the same complex. If this was the case, this site could be one of the largest ever recorded in Northern Ireland (with an area covering c.600x400m). Instead of highlighting those potential extra features myself, I will let the reader's imagination loose on the images above...

Even if the remains are confined to the bivallate hilltop enclosure, the scale and location of the monument begs the question as to whether this represent a late prehistoric hillfort. The enclosure predates the rath and is not located far from the Haughey's Fort/Navan Fort pair of sites just west of Armagh. I personally find it hard to think of anything else than a hillfort that would also match the combination of size, visible features and location witnessed here.

Some extra details can be gathered from historical maps although none pertaining to the archaeology presented here. For instance, these mention that the lands immediately to W and S are liable to flood and that the cross-shaped copse of trees now dominating the hilltop was probably planted between the 1st and 3rd editions of the local OS map (appears on the 3rd ed. but not on the 1st.; see Historic Six Inch Series (OSNI) viewer). Furthermore, we also learn that the small lake or pond visible c.500m to ENE of the hilltop (visible on Fig.10) is modern and the result of limestone extraction (shame, as it would have made a nice parallel with the arrangements seen at Haughey's Fort/King's Stables and Navan Fort/Loughnashade as shown below!). 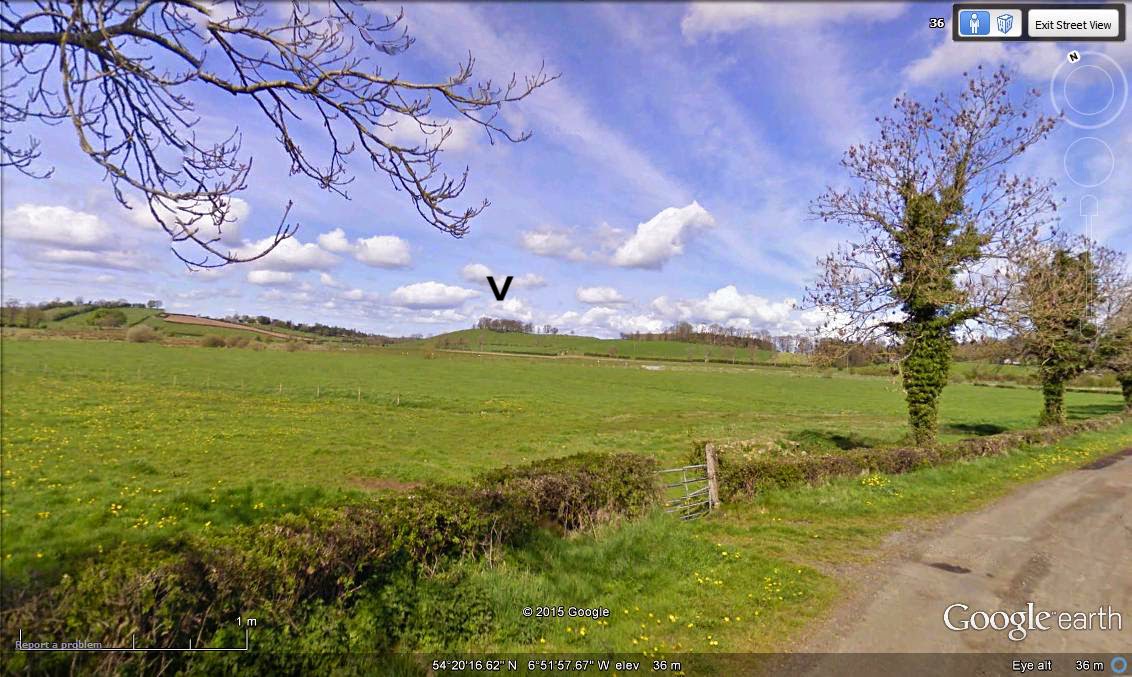 Fig.13: TYR1 (centre of picture with tree copse on summit) viewed from the floodplain
of the River Blackwater (from the SSW).

Note: Outside the perimeter of the enclosure, a smaller feature can be seen on the very left edge of Fig.10, c.300m to the W of the hilltop. It is visible as a circular 'hollow' feature c.15m in diameter. This potential site will be numbered at a later stage when I will be releasing the Co. Tyrone data more systematically. 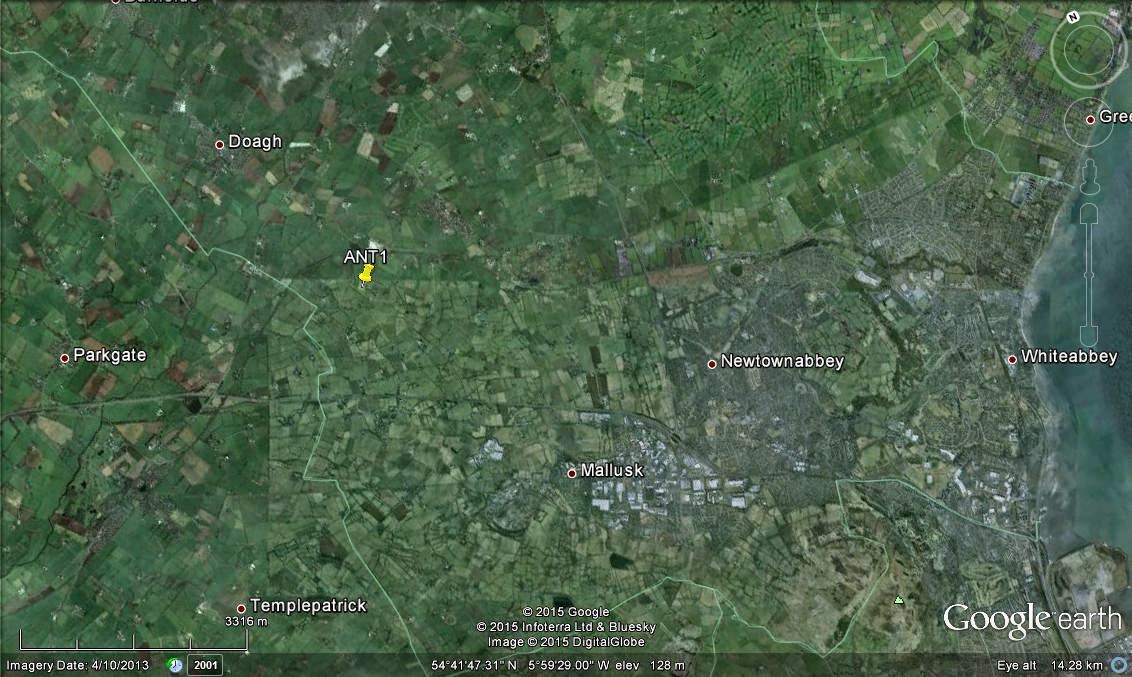 ANT1 is a complex found 1.5km W of the village of Ballyrobert. The site sits on a broad hillside overlooking the valley of the Six Mile Water River and benefits from wide ranging views to N, NE and E. The complex is only visible on a single timed frame (31/12/2010; disregard the default GE date in the following pics) and covers an area c.100x80m: 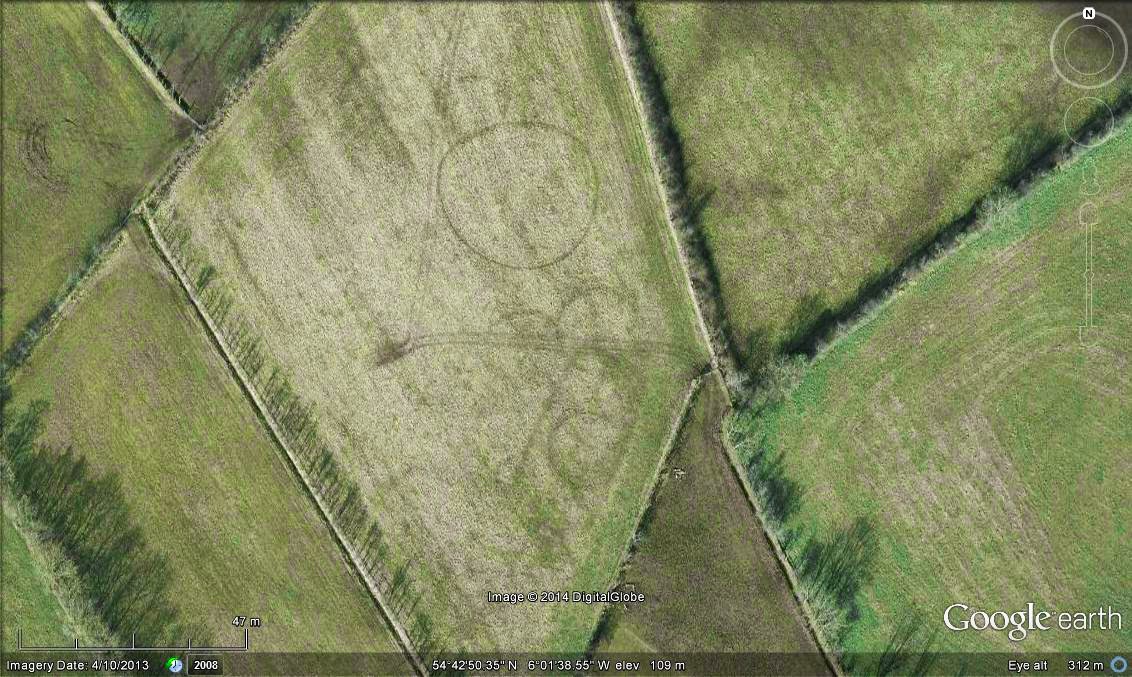 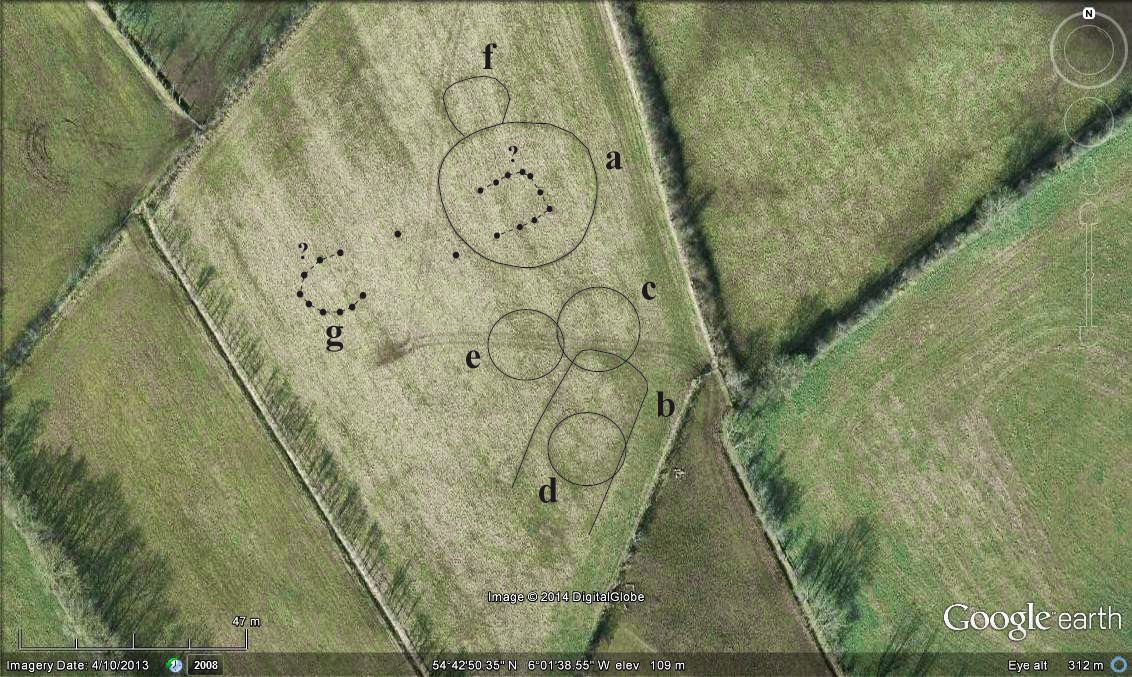 Once you disregard the rather distracting tractor tracks in the pictures above, a number of clear cropmarks can be readily identified:

It is worth noting that several features do intersect each other and the relationships between b, c, d and e remain unclear. A lot could be said about these various sites but to keep things short (and to incite comments!): these undoubtedly form a remarkable complex, of a likely ritual/funerary nature and Neolithic-Early Bronze Age origin. 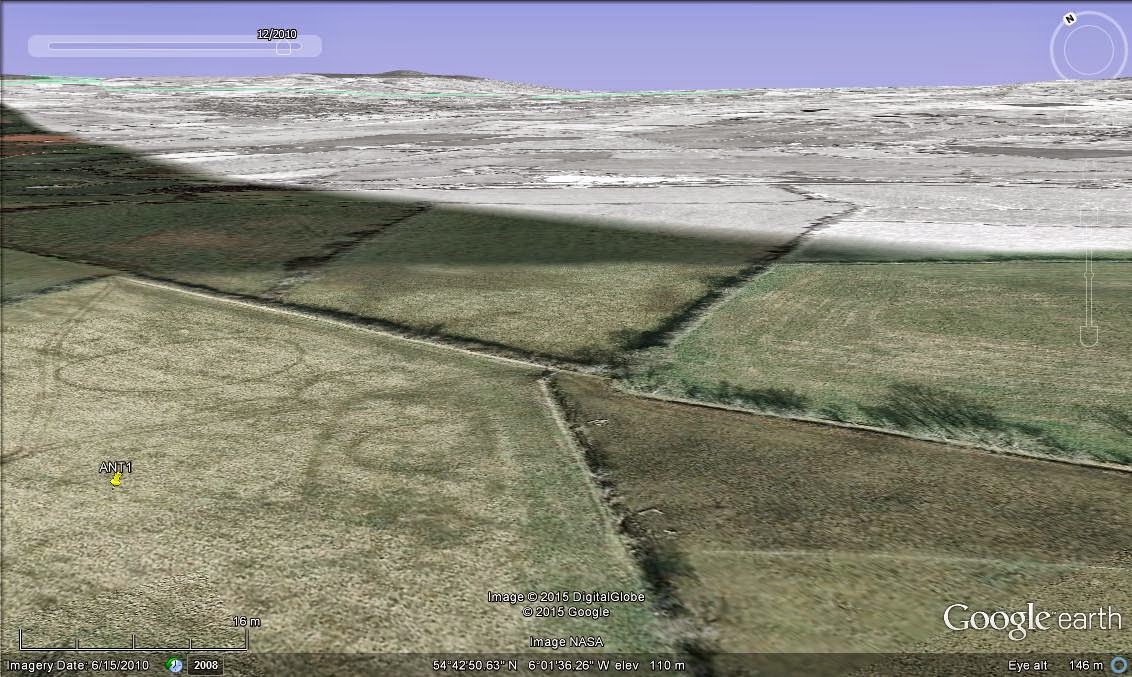 Fig. 17: Possible orientation of sub-rectangular enclosure b in the general direction
of the conspicuous Agnew's Hill, 15km distant to the NNE.

Aside from being one of the nicest prehistoric find within my data, I wanted to highlight this site early on as I believe that it is in urgent need of protection. 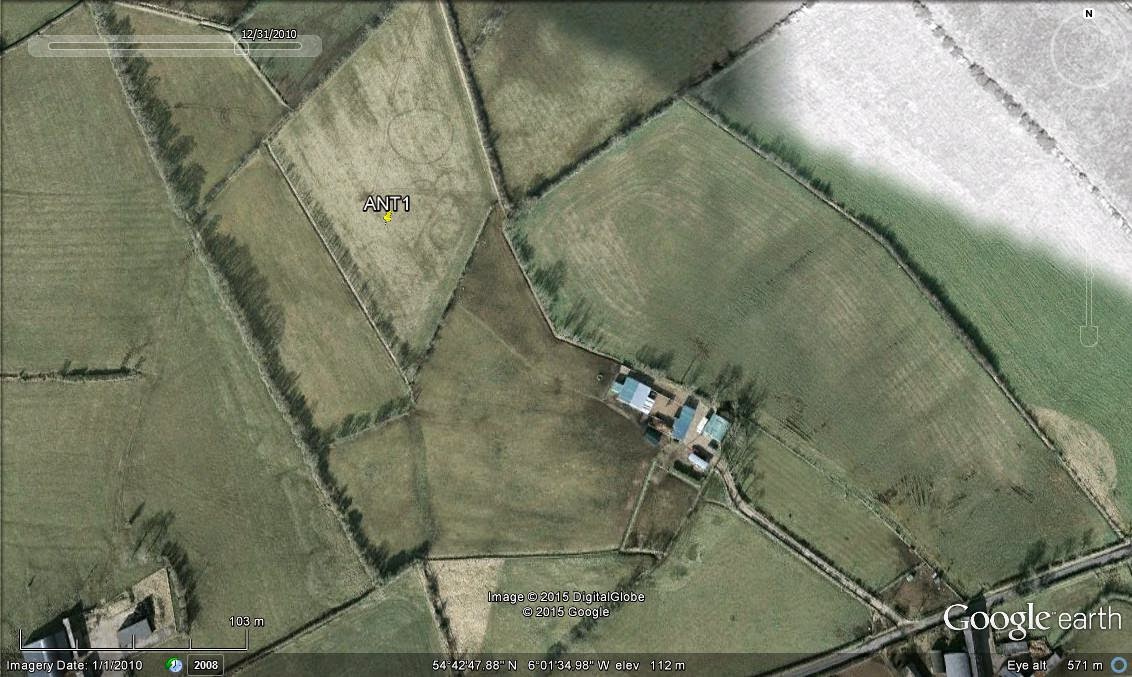 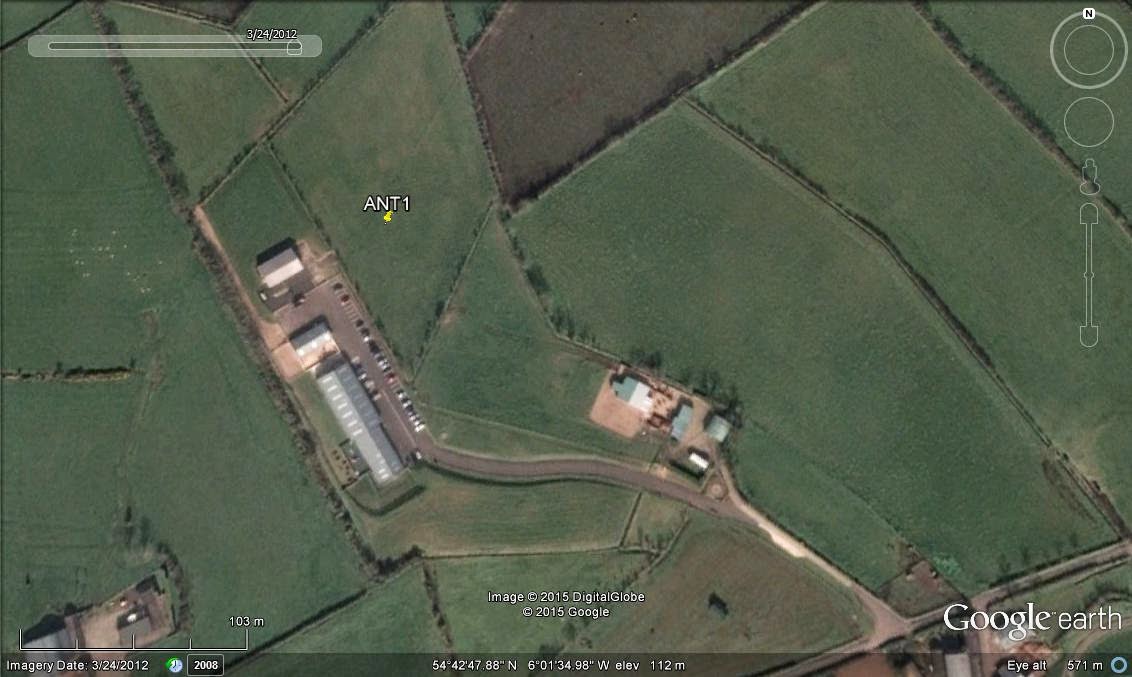 Back in 2010, the complex was sitting peacefully within a patchwork of pastures but a more recent GE view from 2012 shows extensive construction in the vicinity (some sort of business, industrial or agricultural, complete with fully-stocked large car park; compare Figs 18-19).

Since I fear that this new development (immediately to the southwest of the site) could threaten what appears to be a multi-period prehistoric complex, I have re-contacted the authorities at the DoENI to make them aware of the publication of my findings through this blog and specifically highlighted the current precarious situation of this site.

Right, I think that's enough for today and I must thank you for reading through if you've made it this far! Next up will be another set of three sites, all within Co. Down this time...

And please do not hesitate to comment on this first lot!

*** If you like this post and the contents of this blog, please show your support and make a donation to the NIDAS project using the secure button at the right. Many thanks! ***